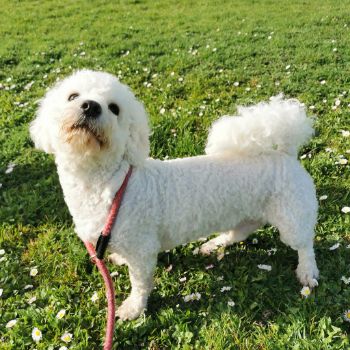 IN FOSTER IN GATESHEAD

Wilson came to us quite a mixed up pup.  He is a lively, clever boy who had never been allowed outlet for his brains and never really taught how to express himself.  As a result, he became on the one hand attention seeking, and on the other, a resource guarder.

Resource guarding is where the dog will guard something it particularly values.  It can be anything – toys, a bed, a person; anything the dog finds of value.  In Wilson’s case it was his personal space.  If he became over tired or anxious, he would defend his space and the  cute fluffy pup would let loose his inner werewolf!

Wilson is now much more relaxed.  He has been taught to use a puppy pen, as his safe space to use if he is tired and needs to rest, or is worried about anything.  Recently he has learned that there are other places where he can relax and not feel anxious.  He now rarely needs to use his pen but new adopters will need to provide one for him until he finds his feet.

Wilson loves to run and play and loves to learn new things – however its important that he doesnt become overtired.  If he does, he finds it hard to switch off – rather like a grumpy toddler.  He loves the company of doggy playmates, and is very gentle with them – a doggy friend in his new home would be ideal.

Wilson is looking for a doggy experienced home that is willing to commit to him and allow him the space he needs if he needs it.   Wilson will need a couple of meets with his new people to get used to them before adoption takes place.

If you think you can give him what he needs we would love to hear from you – please fill in the form below.  Homecheck and £250 adoption donation applies.

PLEASE NOTE- WILSON IS WITH OUR NORTHERN BRANCH AND PREFERENCE WILL BE GIVEN TO APPLICANTS IN THE NORTH OF ENGLAND.